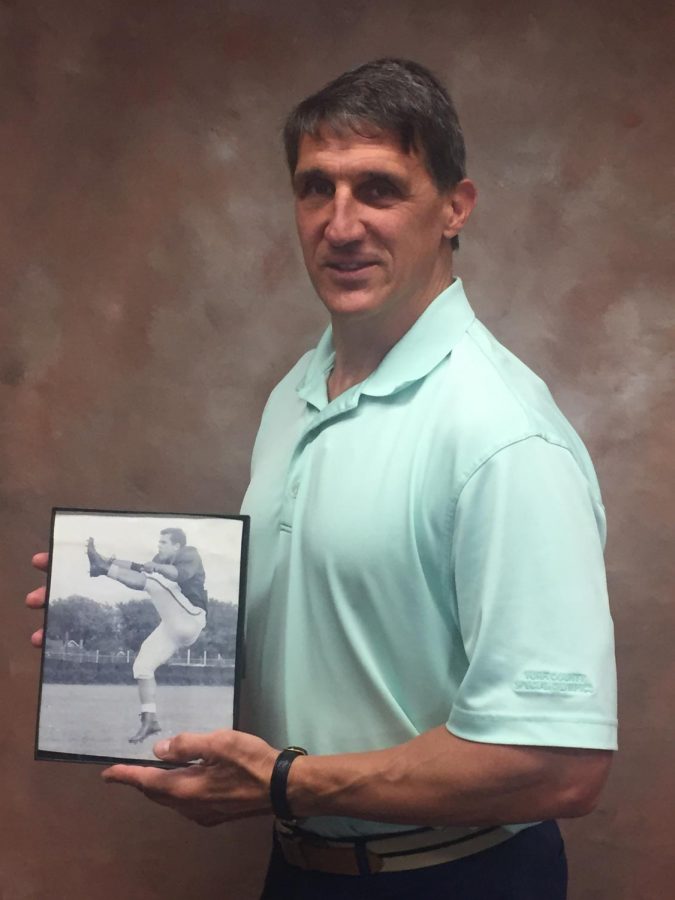 Mr. Michaels poses holding up a picture of his father, Lou Michaels.

We see teachers every weekday from 7:30 in the morning until 2:20 in the afternoon. Have you ever wondered what teachers are up to after school hours?
Some go home to their families, hit the gym with their buddies, read for their book club, and some accept Football Hall of Fame awards.
Gym teacher, Mr. Michaels, accepted the Kentucky Greatest Pro Football Hall of Fame award on behalf of his father, Lou Michaels, this past summer.
Lou Michaels played football at the University of Kentucky. After his collegiate career, he continued his athletic career professionally, first signing with the Los Angelos Rams in 1958, being a first-round pick, being number 4. In 1961, he was traded to the Pittsburgh Steelers.

In 1964, he was traded to the Baltimore Colts where he was most successful. Finally, from 1970-1971 he signed over to the Green Bay Packers after being released from the Colts.
So how good was Lou Michaels? He made 54.8% of his field goals professionally, making 107 of his shots. He made 96% of all extra point attempts of his professional career, making 386 of 402 extra attempts. He scored 586 points, which ranks sixth in franchise history.

In 1968, Michaels helped lead the Colts to a 15-1 and shut out the Cleveland Brown’s, 34-0, in the 3rd NFL Championship on their way to the third Super Bowl. He impressively and effortlessly kicked a 53-yarder in a victory over the Dallas Cowboys at the Baltimore’s Memorial Stadium.

He was also named All-Pro two times and also the Baltimore Colts All-Time Silver Anniversary team (1977).  Lou Michaels was a perfect inductee for this current award.

Gym teacher, Mr. Michaels was very excited to be able to accept this award on behalf of his father at the ceremony. In addition, Mr. Michaels’s daughter, Colby, was happy for her grandfather. “He was always a nice guy. He always put family first. He truly was a great person on and off the football field. I am just happy that he was included in this. He deserved it, ” said Colby.