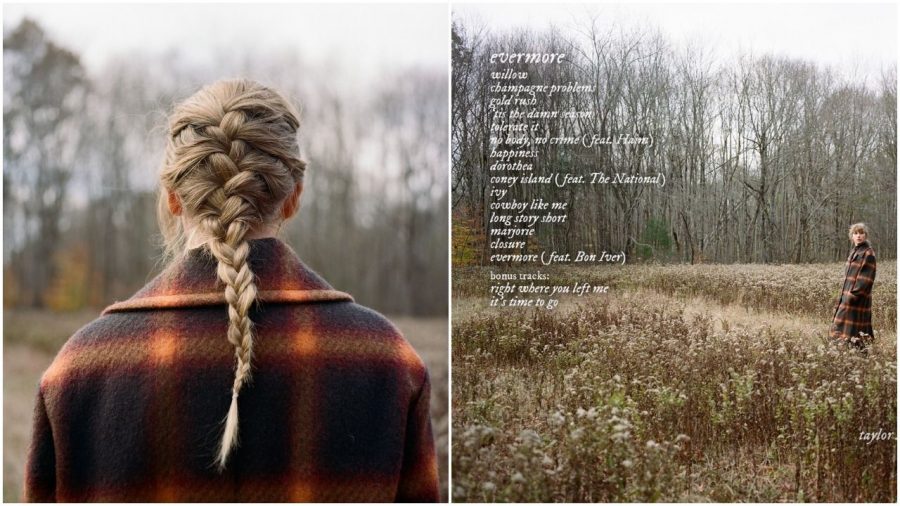 On December 11th, 2020 Taylor Swift released her ninth album titled “Evermore”. This came to as a surprise to many fans as she just released an album a little less than five months ago.

Most artists typically wait around 1-2 years between releasing albums and Taylor was even an artists known to do this.

To help her create this album she was joined by Aaron Dessener , Jack Antonoff and her long time boyfriend Joe Alwyn was credited as a cowriter on three of the songs under the pseudonym William Bowery.

Taylor’s album included features from numerous artists including HAIM and Bon Iver with background vocals on her song “cowboy like me” from Marcus Mumford of the band Mumford and sons.

Taylor and her producers are known to leave “Easter eggs” in her albums. For example in her song “happiness” multiple references to the The Great Gatsby can be found.

Her album folklore, released just several months ago and Evermore’s sister album, seemed to have a more “indie” inspired sound, while Evermore seems to slightly stray away from that path.

Instead it features songs such as a country murder ballad song titled “No Body, No Crime” which brings her back to her country roots and the second to last song on the album “closure” that seems to stray the farthest from any of Swift’s other songs by using auto tune to edit her voice.

In her song “Marjorie”, Swift essentially writes a eulogy to her late grandmother Marjorie Finley. This however isn’t the first time she has written a tribute song to someone who has passed. In 2011 she wrote a song titled “Ronan” about a four year old boy who had died of neuroblastoma.

Both songs are full of emotion and beautifully written.

Although not all of the songs seem to be attached almost all of the tracks are “mirrored or intersected” said Swift.

Taylor Swift has written many sad and tragic love songs over the course of her career but on her album Evermore the song “Ivy” really seems to stand out with its gut-wrenching and heartfelt lyrics.

Overall I thought this album had extremely well-crafted and heartfelt lyrics along with a strong story-line and beautiful instrumentals. Possibly one of Taylor Swift’s best albums yet.